After the Queen’s death on the 26th of November of 1504, her corpse was immediately moved from Medina del Campo (Valladolid) to Granada. It was provisionally placed, as she anticipated in her testament, in the Franciscan Convent of the Alhambra.

On the 23rd of January, when the King Ferdinand died in Madrigalejo (Cáceres), the Royal Chapel was still unfinished, and his mortal remains were also taken to the Franciscan Convent.

The Kings’ mortal remains were moved to the Royal Chapel Crypt amid strict solemnity on the 10th of November of 1521 at the instance of The Emperor Charles I.

THE TOMB OF THE CATHOLIC KINGS

A work made by the Florentine sculptor Domenico Fancelli, and finished in 1517. According to the Spanish tradition, it has a military aspect. The tomb adopts a pyramidal frustum shape. The recumbent figure of the King is singular due to its military iconography. The King is wearing a complete armor and is half-covered by a cloak. His hands are resting on his back. The Monarch’s head is magnificent, showing a delicately modelled face.

The recumbent figure of the Queen is dressed up with simplicity. She appears holding softly her hands, and placing them on her body. It seems that the keys of its funereal iconography were the humbleness and the honesty, virtues that were considered to be very praised by her contemporaries.

Two small resting lions can be seen at the bottom of the Kings. They symbolise royalty and vigilance. In the centre of the burial bed sides you can see four sunken round niches excellently made: The baptism of Jesus Christ, The Resurrection, St. George and the dragon and Santiago. The sunken round niches are flanked by a succession of niches depicting the twelve apostles sitting. On the cornice, and dividing both bodies of the mausoleum, sitting statues of the four doctors from the Latin Church appear at the corners: St. Gregory, St. Ambrose, St. Jerome and St. Augustine.

At the front, naked and chubby putti with sweet expression hold the Kings’ weapons. At the bottom, and inside a cartouche, the epitaph remembers us that «[…] Ferdinand of Aragon and Isabella of Castile, unanimous husband and wife, called the Catholics, are buried in this marble burial mound.»

The Royal Mausoleum iconography shows a remarkable ecclesiastical aspect, due to the relevant role assumed by the apostles and the four doctors. The sunken round niches of the high sides have a clear paschal meaning: the baptism participating in the death of Jesus Christ is presented as the way towards Resurrection.

The frieze is divided into two sections. The upper section is decorated with heraldic motifs, royal insignias and military trophies. In the lower section, different themes are depicted, framed by garland festoons. These themes are taken from the Bible, the mythical bestiary and the vanity experience.

MAUSOLEUM OF JOANNA I AND PHILIP I

Three sculptors worked in this mausoleum: Domenico Fancelli, Bartolomé Ordóñez and Pietro de Carona. Bartolomé Ordóñez did not follow Domenico Fancelli’s original design. He made significant innovations: the restitution of the burial bed, the replacement of the angular mythical animals by amazing statues of satyrs and the laying of the recumbent statues on a sarcophagus.

Joanna shows an idealised beautiful face, a calm elegy representing one of the most inspired creations by Bartolomé Ordóñez. The Queen is elegantly dressed up in the Burgundy style. She is holding a sceptre in her hands and she is wearing a rich necklace on her chest.

Philip, the archduke king, is wearing a Dalmatian armor embroidered with the coats of arms of Burgundy, Flanders and the Spanish Kingdoms, and a cloak with a wide ermine collar. On the collar, the order of knighthood Toisón de Oro stands out. He is holding the sword up with both hands.

The tomb corners angular ends are statues of satyrs. They are carrying royal insignias and emblems, helped by putti: the Golden Fleece, the flint and the St. Andrews’s Cross, the bundle of arrows, the yoke and the straps, and the heraldic pomegranate.

Here, the circular niches depict the evangelical acts in relief: the Nativity, the Adoration of the Magi, Gethsemane and the Descent from the Cross. In most of the niches, allegories of the liberal arts and the theological and cardinal virtues appear. Philosophy and Arithmetic are at the head, and Grammar and Logic are at the bottom. On the king side, Fortitude, Charity, Faith and Hope. On the Queen side, the double-faced effigy of Prudence, Justice and Temperance and a fourth niche probably representing Patience.

The epitaph translation is as follows: «This sepulchre covers the survivors of fame and the bodies deprived of their lives of the King Philip of the Spanish kingdoms, the first, both in name and in the Austrian dynasty to whom death armed with its scythe, having founded him mature in virtues, and considering him to be an elderly man, cut his life short in its prime (he died aged 28 in 1506), and of Joanna, his wife, who was covered with glory by all the royal lineage of Castile, León and Aragon (she died in 1555 at 75 years of age). ¿Why more? From both Kings union the Emperor Charles V was born, who erected this monument to his parents.»

Under the tombs there is a small crypt remarkably austere, where the lead royal coffins are placed. They are identified by each name initial on their covers. In the centre, the Catholic Kings appear on a stone platform. On both sides, on the continuos stone bench encircling the interior, the visitor can see the coffins of Joanna and Philip, and the small coffin of the Prince of Asturias, Michael. At the front wall, a small wooden crucifix in the Gothic style presides the crypt. The corpses of the Empress Isabella of Portugal, the Princess Maria and the infantes Ferdinand and John, the emperor’s sons, were also placed here, before they were moved to El Escorial Monastery in 1754. 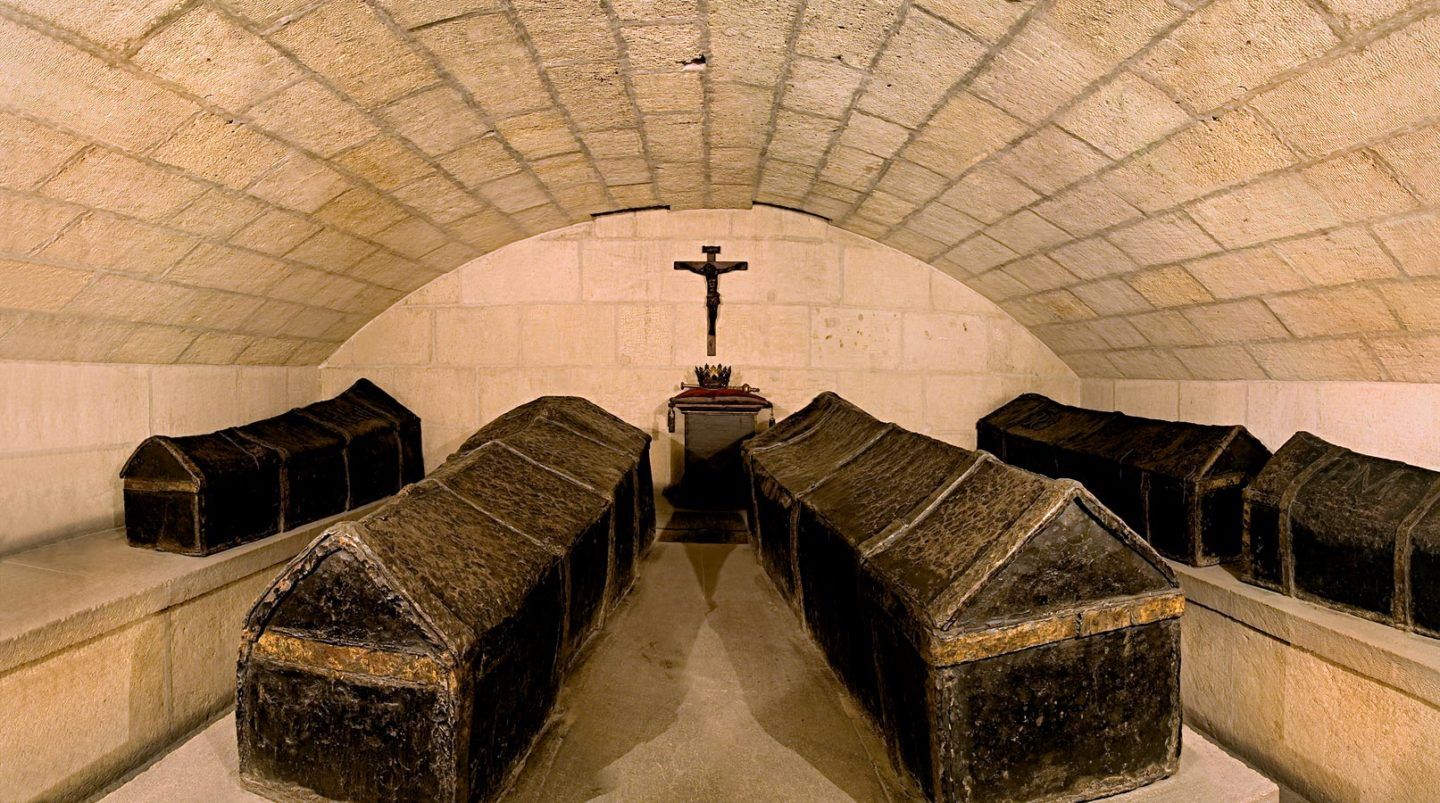